A “re-imagined” Three Musketeers starts tonight on BBC. When a couple of months ago I was researching the history of detective fiction for a talk I was giving, I came across a scene where d’Artagnan shows powers of analysis of a crime scene worthy of Holmes himself. So will this facility survive the update? This is the (rather lengthy, but worth it) passage:

“While the king was engaged in making these last-mentioned arrangements in order to ascertain the truth, D’Artagnan, without losing a second, ran to the stable, took down the lantern, saddled his horse himself, and proceeded towards the place his majesty had indicated. According to the promise he had made, he had not accosted any one; and, as we have observed, he had carried his scruples so far as to do without the assistance of the stable-helpers altogether. D’Artagnan was one of those

This from Marcel Berlins’ crime round-up:

The Dead Can Wait by Robert Ryan
Dr John Watson was not, it seems, quite as dim as he’s portrayed in the Sherlock Holmes stories. Robert Ryan (with the consent of the Conan Doyle estate) reveals his true mettle. The Dead Can Wait is in no sense a pastiche, but a seriously good, very readable, well-researched novel incorporating the First World War, detection and espionage. It is 1916. Watson has become an expert on the injuries and mental traumas suffered by soldiers in battle. The British are secretly developing a new kind of weapon. But, in its first test, seven men involved become insane, then die spectacularly. The sole survivor is rendered mute. Watson is commanded to discover the causes of the tragedy, but there are foreign spies around and enemies within.
The Dead Can Wait by Robert Ryan, Simon and Schuster, 463 pp, £18.99. To buy this book for £14.99, visit thetimes.co.uk/bookshop or call 0845 2712134

The novel is partly set on ‘the most lethal road in England’, of which more later:

This review is from Manda Scott, of the Historical Writers’ Association (www.TheHWA.co.uk) a.k.a M.C.Scott (Rome: The Art of War):

“I became a fan of Rob Ryan’s work at Harrogate History Fest in October, when I heard him speak on a panel about Sherlock Holmes….. Apparently there was a single line in one of the last Holmes books which said that Watson had gone back to his ‘old unit’ – that being the RAMC, and given that we were on the brink of WWI, that means he went back to war. 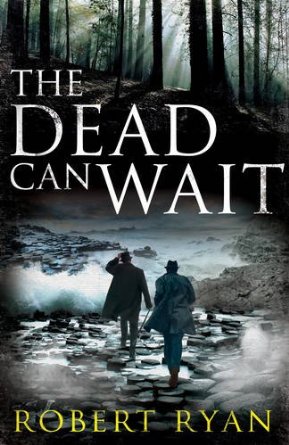 Thus arises one of the best post-Conan Doyle Sherlockian series, and a fantastic historical crime series. The Major John Watson we come to know in the trenches in DEAD MAN’S LAND and again here in the UK in The Dead Can Wait is a humane, compassionate, competent individual, who nevertheless appreciates the help of his steadily deteriorating friend, Holmes. The horrors of war are not stinted, but nor are they gratuitous. In DML, we (well, I) learned a huge amount about nurses and the various auxilliaries and how they worked, while in TDCW, we (I) learn a lot we (I) didn’t know about ‘shell shock’ and then, later, about the early development of tanks. It’s fascinating, and yet none of it is presented as ‘here is the research I did, now suck it up and learn it’ which is so often the case in historical novels of this sort. It’s all integral to the plot, and carries the dynamic tension even as we’re given a virtual tour of the tank testing grounds. There’s a truly scary German woman-spy, part of a network called the She Wolves, of whom I’m sure (I hope) we’ll learn more, and the very welcome return of Mrs Gregson, the red-headed, motor-bike riding, thoroughly competent nursing auxilliary.

In a year when there are going to be 1,000 ( at least) books about WWI published, this will be one of the first, and I am prepared to bet, one of the best. It’s a cracking, fulfilling, utterly satisfying read and you should get a copy now…”

Out January 2 in hardback and ebook.