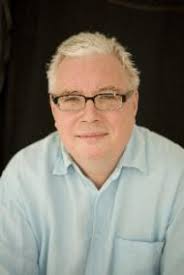 Robert Ryan was born in Liverpool and moved south to attend university. He graduated from Brunel with a M.Sc. in Environmental Pollution Science, intending to go into teaching. Instead, he spent two years as a mechanic for a Hot Rod team, racing highly tuned Fords (“the fag-end of motorsport”, as Bernie Ecclestone calls it) where he became addicted to the smell of Castrol R. Weaning himself off that, he became a lecturer in Natural Sciences in Kent, while dabbling in journalism. His articles on comic (or graphic novels as they were just becoming known) gurus Alan Moore and Frank Miller found their way into Nick Logan’s The Face magazine, which led to work for the American edition of GQ, The Guardian, Sunday Times, Telegraph and Arena.

Eventually he took a position on staff at The Sunday Times as Deputy Travel Editor. It was while on assignment in Seattle that he came across the setting for his first novel, Underdogs – the ‘lost’ city beneath the sidewalks of downtown – that was called ‘Alice in Wonderland meets Assault on Precinct 13’ by Esquire.

While learning to play the trumpet for his third book, Trans Am, Ryan met Guy Barker, who, as well as being a great jazz trumpeter, had worked with Anthony Mingella, notably on The Talented Mr. Ripley. Guy read Underdogs and wrote a ‘theme’ for the book, which opened his Mercury-nominated album Soundtrack. ‘Underdogs’ eventually became a fifty-minute suite, featuring extracts from the book read by RSC actor Anthony Higgins (most recently seen in Michael Dibdin’s ‘Zen’ on BBC), and was performed at The Barbican and the Brecon Jazz Festival and filmed by the BBC.

Ryan’s next book, Early One Morning, broke into the Sunday Times’ top ten bestsellers’ list, and began a sequence of historical dramas set in the 20th century.

He collaborated again with Barker on dZf, a film noir-ish reworking of Mozart’s The Magic Flute, which had its World Premiere at Wakefield Rugby Club and its final outing, twenty performances later, in Hong Kong. It was narrated by actor Michael Brandon (Jerry Springer The Opera, Dempsey and Makepeace, Captain America) and is available on Guy’s double CD, The Amadeus Project.

Ryan’s previous book Signal Red, a novel based on The Great Train Robbery, has been optioned by World Pictures and the writing-production team behind the TV drama United, starring David Tennant.

His latest novel, Dead Man’s Land (Simon & Schuster) takes Dr John Watson to the Western Front of WW1, where he has to solve a crime without the benefit of his old colleague Sherlock Holmes.

He continues to contribute to The Sunday Times and is working on further jazz projects with Guy Barker. He lives in North London with his wife, three children, a dog and a deaf cat.