I have a soft spot for Berlin’s Tempelhof Airport, which was built between 1934-36 and mothballed seventy-odd years later. Yes, it is a symbol of Nazi Germany but, even though its pedigree is suspect, the audacious sweep of the curved building, the 50m-wide canopy to cover the aircraft and its intimidating scale – like all Nazi-era public buildings it was intended to make you feel very small indeed – was and is very impressive. 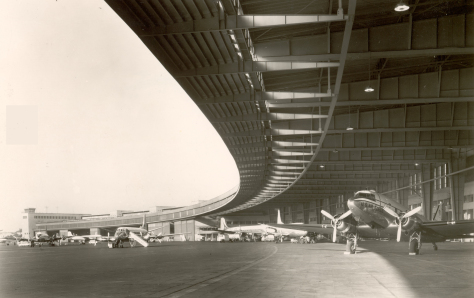 Sir Norman Foster called it the ‘mother of all airports’ – after all, the main terminal building is a stunning 1.2 kilometres long. It also featured in my novel about the Berlin Airlift of 1948, Dying Day, re-issued this week by Open Road as an e-book in the USA (see http://www.openroadmedia.com) and I spent a fair amount of time back in 2006-7 poking around the airport. 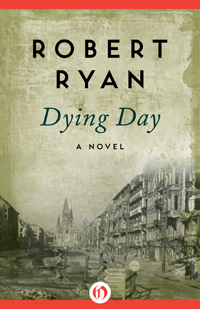 So I thought it was a shame when Tempelhof closed to air traffic in 2008. Since then it has entered a twilight phase – the main runways have morphed into a popular public park, but the vast and iconic terminal buildings are only used for ad hoc fashion and music events. A recent conversation with Burkhard Kieker, CEO of Berlin Tourism, however, suggested that there might be an interesting future for the building.  ‘A long section of the roof was designed to support a hundred thousand people – so they could welcome Hitler when he landed and listen to his speeches. My vision is to turn that into something like the High Line in New York – an aerial park, with trees and shrubs and cafes.’

It’s a great idea. Much is being made by Berlin of the 25th anniversary of the wall coming down in November. 2018, though, is the 70th anniversary of the  Airlift, an almost equally important bookmark in the city’s history. It would be very apposite to have something opening on the roof of Tempelhof by then, overlooking the field where the constant flights saved the city from starvation.

The Hotel Jalta sits in a prime spot on Wenceslas Square in central Prague. It’s tall and imposing, as it should be given its vintage: the Jalta opened in 1958, when Prague was in thrall to Moscow and public buildings had statements to make. The Jalta, though, is not just another brutalist piece of Socialist Realism. Instead, its lines, both inside and out, are softened by Art Deco and Nouveau touches – the figures carved on the facade, the balustrade of the sweeping staircases and the geometric patterns on the stone- and metalwork. True, the corridors are wide enough to drive a tank down, just in case guests got uppity, so the proportions are definitely in the mode of so-called Stalinist Baroque, but the architect, Antonín Tenzer, did a brilliant job of softening the totalitarian feel of such buildings.

Nobody is quite sure how Tenzer got away with this subtle celebration of western decadence. Some say he had the ear of the Czechoslovakian president at the time of construction, Antonín Zápotocký, others that he was allowed a little leeway in return for keeping schtum about one of the hotel’s most intriguing amenities – its built-in nuclear bunker.

The subterranean shelter was the first part of the Jalta to be built, the hotel’s construction being a perfect cover for the surreptitious excavations needed. Able to house 150 people, with its own underground water supply and hospital, it was intended to be a Warsaw Pact command centre should, say, Moscow be knocked out in a ICBM strike, as well a bolt-hole for the Czech government.
The Jalta is still open for business, these days as a rather nice 99-room boutique hotel and restaurant (Como), but so is the nuclear bunker. By booking in advance (and paying £2.25) you can tour some of the rooms that have so far been opened to the public. Access is via steep stairs and through a hefty blast door. There are various stagy exhibits and artifacts, but the real star is the structure itself, which comes with what look like torpedo tubes, that are in fact ventilation and communication tunnels that lead to….well, nobody is quite sure. The full extent of the bunker is yet to be established. My guide to Prague, Eva Vondrusová, said: ‘Jalta was where the visiting foreigners all came and stayed. There was even a nightclub. And prostitutes, which was against the law, but nevertheless everyone knew the girls in the basement of the Jalta were for sale.’

The reason for this laissez-fare by the authorities is clear from an artifact sitting on a desk in one of the rooms – the Czech State Security’s switchboard. It looks like an ordinary old-fashioned wire-and-plug telephone exchange, but in fact this was the device with which the StB could activate the bugs in the rooms. On the hotel plan above the switchboard, the VIP rooms, where journalists and politicians were housed (with, the StB doubtless hoped, the odd call girl or two), are coloured red, so the listeners knew which rooms to go for first.
Eva tells me that the system led to some Le Carre-like tradecraft among the visitors. ‘When the reports of the listening devices were declassified, lots of them said that the operators couldn’t hear the conversation because of loud music or the shower was running. Everyone knew everywhere was bugged – and even the bunker was an open secret. When the Jalta manager was asked who in the hotel knew about the secret bunker, he said everyone who worked here. But those were the days when it was best you said nothing.’ Little wonder that almost everyone I spoke to in Prague brought up the subject of Ukraine and Putin and shivered a little, as if the old, cold days could sweep back at any moment. What lies beneath the Hotel Jalta certainly doesn’t feel like ancient history, not yet at least.

I travelled as a guest of Voyages-SNCF (0844-848 5848, voyages-sncf.com), taking the night train from Amterdam to Prague. Of which more later.