Don’t ever buy second-hand books with a New Year’s Day hangover. Wondering around a local used bookshop with my eyes narrowed against the punishing light, I came across what I thought was a true-life adventure by Sir Arthur Conan Doyle called Lone Dhow. When I got home, my eyes focussed a little better and I saw it was by ADRIAN Conan Doyle, ACD’s son by his second wife Jean. Lone Dhow is a tale about trying to capture a live tiger shark for the University of Geneva and there 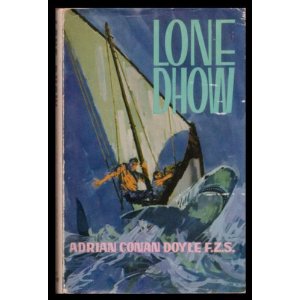 is something rather self-regarding about the tone. Certainly ACD’s biographer Andrew Lycett is less than complimentary about Adrian, calling him ‘a spendthrift playboy…who used the Conan Doyle estate as a milch-cow’. Adrian wrote a volume of Holmes stories (apparently with the help of John Dickson Carr), published as The Exploits of Sherlock Holmes, and established a replica of Holmes’s 221b at his home in Switzerland. Some of the tales are rather stilted but the best match the quality of his father’s later tales. There is an interesting interview by a young Joan Bakewell Adrian with on You Tube that includes him driving his Lamborghini and showing off his medieval castle and its Holmes’s shrine: http://www.youtube.com/watch?v=THtIleV3sfg

1 thought on “THE WRONG MAN”