I have a piece in this weekend’s Sunday Times Travel on skiing (very badly) in Arosa in Switzerland. I was drawn to the resort partly because at the time I was writing Dead Man’s Land, featuring Dr Watson, and I knew Sir Arthur Conan Doyle had put Arosa on the map. The author was a keen sportsman and when he was staying at Davos (for his wife’s health) he ordered skis from Norway and set about teaching himself the discipline. As he wrote in The Strand magazine in 1894 “You let yourself go, gliding delightfully over the gentle slopes, flying down the steeper ones, taking an occasional cropper, but getting as near to flying as any earthbound man can. In that glorious air it is a delightful experience.’”

He was soon good enough to attempt the treacherous crossing over the Maienfelder Furka pass linking Davos to Arosa, which he did in the company of two local guides (the Branger Brothers). “But now we had a pleasure which boots can never give,” he wrote, “For a third of a mile we shot along over gently dipping curves, skimming down into the valley without a motion of our feet.  In that great untrodden waste, with snow-fields bounding our vision on every side and no marks of life save the tracks of chamois and of foxes, it was glorious to whizz along in this easy fashion.” Conan Doyle was one of the first English writers to eulogize the joys of skiing and he prophesized: “I am convinced that there will come a time when hundreds of Englishmen will come to Switzerland for the ‘skiing’ season.” Within a few years both Davos and Arosa became winter favourites of his readers. 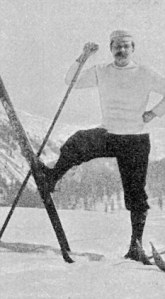