I recently did a Great Drive through rural Buckinghamshire for The Sunday Times Drive section. It was to follow the route taken by the Great Train Robbers as they took their haul of £2.6m from Bridego Bridge (off the B488) to their ill-fated choice of hideout, Leatherslade Farm near Brill. As Bruce Reynolds, chief planner, said in his memoir, Autobiography of a Thief: ‘The next morning Paddy and I set off in his 3.8 [Jaguar], driving up and around the target area. The more I saw, the more I liked it. I plotted a route which took us south in a dogleg onto the Thame Road. It was a great route, B-roads all the way, crossing two main roads in all.’ He isn’t kidding about the dogleg – in fact, there’s more doglegs in the 28 miles than Battersea Dog’s Home in January. You can read the results of following Reynolds and the robbers in The Sunday Times soon. Meanwhile, here is a short film we shot at the bridge (go full screen to see the captions properly – sadly it also makes my face bigger):

Thanks to Tony O’Keeffe of Jaguar Cars and Jagmeister Michael Byng, who brought along one of his Mk 2s. This is a rough version of the final film – although I am still hoping the moment when I tried to start the 3.8 with the cigarette lighter button doesn’t make the final cut.

Incidentally, as well as the usual outlets, you can now get the novel that started all this malarkey, Signal Red, through iTunes: http://tinyurl.com/pwmo8zj. 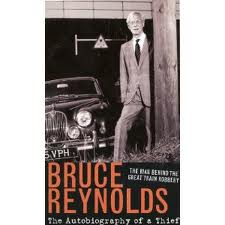 When Bruce Reynolds had finished the manuscript of my novel Signal Red, he asked if he could pen a postscript ‘just to set the record straight’. This is what he gave me, written in a shaky hand from his sick bed (he had flu) on foolscap paper. It can be found in the end pages of the novel.

“A Glasgow to London mail train was stopped and robbed in Buckinghamshire early today. It happened at Cheddington, near Tring, at about 3am. The driver and the fireman were attacked and injured and two coaches of the train were detached. They contained mail of all kinds, including registered post, said a police spokesman a short time ago. It is believed a large number of men took part and that they got away with a considerable amount of cash. Neither the driver nor the fireman was seriously injured. Senior officers of Buckinghamshire police are now at the scene.”

Bruce Reynolds, author of Autobiography of A Thief (Virgin Books)