There was some carping that Chic didn’t belong on the bill at the Love Supreme Festival last weekend. A disco band at a jazz festival? Yet, both Nile Rodgers and his late partner, Bernard Edwards, came from a jazz background, as Niles demonstrated with some Wes Montgomery-style noodling while getting the sound right. Furthermore, it’s hard to tell how many of the 7,500 a day tickets he and his Daft Punk/Glastonbury connection added but, along with an accurate forecast for glorious weather, it must have been significant. 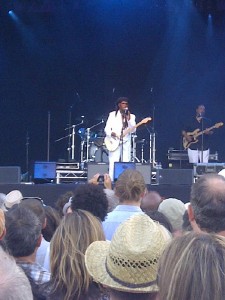 Certainly, the very youthful faces in Chic’s crowd (who could just about place Let’s Dance as a Bowie record) weren’t there because of Chic’s heyday, but they were a welcome dilution of the usual jazz demographic. Poor Portico Quartet suffered in the nearby Arena, being swamped by the tsunami of slap bass and sing-alongs, Brass Jaw were equally outgunned by an exuberant Soweto Kinch, although they later gave an nicely impromptu al fresco blow to make up for it. Next year (we are promised at least three Love Supremes), the proximity of the Arena to the main stage needs to be looked at. As does the car parking – some marker boards so you can locate your vehicle in the middle of a field in the dark would help. But, a few gripes apart – is there any way to prevent ridiculously lengthy peak-time beer queues at a festival? – ALS was a very creditable inaugural effort. One thing I liked was that it was small and comfortable enough that you could always get close enough to the stage to look the artists in the eye – so there was no need for the giant screens of larger gatherings. Plus there was fine music, with notable performances from Snarky Puppy – not so much snarky as rabidly good – Gregory Porter (below), whose star continues to shine brighter and brighter,

Go Go Penguin, Michael Kiwanuka, Terence Blanchard, Troyka and Neil Cowley (due to clashes/tennis/interviews I missed several acts, including Esperanza Spalding, who sounded in fine form, and Melody Gardot). John Fordham in his very fair Guardian review (www.guardian.co.uk/music/2013/jul/07/love-supreme-festival-review) didn’t seem to mind Bryan Ferry, but I thought, as accomplished as his Jazz Age band was at evoking the ‘20s/30s, it was all just plain weird, especially when his guitarist appeared to shred things up a little. Overall, though, A Love Supreme is well worth booking a slot for next year. Let’s hope the sun thinks so, too.