There is a report by John Dugdale in the Guardian today (gu.com/p/3daqd/tf) on the author event I took part in last Monday with Barry Forshaw, Mark Billingham, Laura Wilson and pathologist Carla Connelly at the British Library. He correctly says we discussed violence in our books at length and considered any taboos in our writing. I forgot to mention that in Dead Man’s Land there was to be a scene of gang rape. I sat at the head of that chapter for days thinking: my wife and kids are going to read this. I really didn’t want to write it. Yet it was a pivotal inciting incident. Then the solution came to me: tell it in song. Not some cheery ditty, but a murder ballad (or rape ballad I suppose). In the end I re-worked the lyrics of Fairport Convention’s Matty Groves (a sort of Lady Chatterley’s Lover tale with added murder, marvellously sung by Sandy Denny) and had one of the characters sing that. I checked with Joe Boyd, who produced the album Liege and Lief, 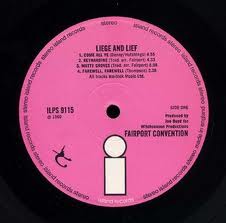 that I wasn’t breaching any copyright by keeping one line of the original words in as a clue to its origins, but he assured me it was a traditional piece. I was subsequently asked (of which more later) to help with a piece for the forthcoming Benjamin Britten centenary at Snape Maltings near Aldeburgh. And I discovered that Britten, too, had used a version of the Matty Groves story in a piece called The Ballad of Little Musgrave and Lady Barnard (for male voices and piano). If you look up that piece, it will say, bizarrely, that the world premier was at Oflag V11b, a POW camp in Germany. Britten composed it in 1943 or Richard Wood, the husband of one of Britten’s singers who was a POW at the camp at Eichstätt, Bavaria. He organised a music festival for the prisoners between February and March 1944 and Britten’s work – sent out in a Red Cross parcel – was performed at seven of the concerts. The Imperial War Museum has the original score. As part of the Britten centenary celebrations Jon Boden, BBC Radio 2’s ‘Folksinger of the Year’ 2010, weaves a new work into The Ballad of Little Musgrave and Lady Barnard at Snape Maltings on August 11 (see www.brittenaldeburgh.co.uk). My efforts – with someone else supplying the music – will be at the same venue on June 12.