As a tie-in to the imminent release of the Dr Watson novel DEAD MAN’S LAND, Simon & Schuster has made available a free e-book of the Complete Sherlock Holmes. As part of the package they asked me to write an introduction, which I duly did. Then the artwork came. You do realise, I told them, that it wouldn’t say 221b above the door? That the ‘b’ signified Holmes’s and Watson’s lodgings, not the whole building? There would be a doorbell or door pull marked ‘b’. We’ll get letters, I said. My editors thought for a minute and said: We’ll get letters if we don’t put it there. Apparently Stephen Moffat and Mark Gatiss had similar discussions with their BBC Sherlock re-boot. In the end they decided the address was so iconic, the ‘b’ had to stay. And if it’s good enough for them…. 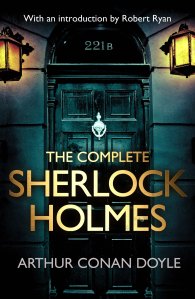